Boomer and I have been a team for just over 5 years now.   It's been an amazing ride and my heart hurts to say that Boomer will be retiring at the end of this month.

We have had an awesome journey as a team, and he had joined me to many things with the kids- basketball games and track meets with KT, Boy Scout Court of Honors, Black Belt promotions, Orchestra concerts, and track meets for AC, Orchesta concerts, Girl Scouts,  Art classes and guitar lessons with MD.

Boomer has been with me to volunteer in the schools and give talks about people with disabilities.  He's been to church with us nearly every weekend as well.   A large group of people know him well and love him too.

Boomer is 7 1/2 so he is a little bit young for retirement, but thanks to a wonderful organization called AVCO/Stokes RX- they provide free yearly eye exams for guide dogs   You register for your exam through this website in April and call and schedule the exam with a Veterinary Ophthalmologist during the month of May.

We have taken Boomer for the last several years for his eye exam and in May of 2017 there were cysts noticed in his left eye.  It was noted and since dogs sometimes get these and people don't even know they have them we weren't terribly concerned, however if these are accompanied with pigmentation dispersion, especially in the Golden retriever breed, then there is concern of a hereditary condition called GOLDEN RETRIEVER PIGMENTARY UVEITIS or also called GRPU for short.

So we continued on our merry way and a year later, with a different Veterinary Ophthalmologist, his exam in 2018 showed progression in the left eye with the second symptom and the formation of very small cysts in the right eye- leading to a confirmed diagnosis of GRPU.   We were still in what is considered early stages of this journey and his work was still safe and we were to begin eye drops to prevent the secondary complication-glaucoma and have a follow up appointment in October 2018 to monitor progression.

The summer brought several trips for college visits to various states for KT, who is a senior this year in HS and was being recruited for throwing discus and shot put for Track and Field at various colleges.  We began to notice that Boomer was missing some minor things that he hadn't been missing before.  After contacting GDF and a follow up with the VO- she reported that there was progression but that his vision was still considered to be safe for working, however that it was advisable to have an exit plan in mind since it is obviously progressing and and that a realistic progression to no longer being safe to guide would occur within the next year give or take.

Thus the decision was made to go ahead and start the application for guide dog #5 with GDF.   I knew that with the TODAY Show puppy- Sunny and his siblings and late President Bush's service dog Sully, who all are from the Guide Dog Foundation for the Blind/America's Vet Dogs program, that there has been a large influx of inquiries and applications to GDF/AVD.

GDF Field Rep Bryan came and also evaluated Boomer to see if he felt his work was still solid and did my home interview for the the application process as well- which is where we discussed my current needs in a guide dog- speed, what I desired in a dog regarding it's work and to some degree it's personality.  We discussed my past dogs and what things have worked for me and what hasn't and we talked about the changes that have been made in the training program since I'd been there last.  I voiced what concerns I had and we talked through these and I am excited to try the new training format of two weeks instead of 4 weeks as Boomer and I had done.

I told him I wanted a dog that would make a decision and go with it or have lots of intuition and needs little instruction to accomplish the task once asked to perform that task.  I need a dog that is able to handle stressful situations with large crowds on a regular basis as our church has continued to grow by leaps and bounds and is exceeding 4000 members across 4 services in a weekend.  A dog that doesn't have to be around little kids nearly as much as in the past but one that can handle going to basketball games, Karate graduations/competitions, Boys Scouts, Orchestra concerts and Track and Field meets and unfamiliar routes that we haven't been to before because of these.   I said that while I don't necessarily have to have what some long time handlers call "hard" dogs, but that from my experience and from what I've heard from other handlers, the traits of a "hard" dog seems to thrive better with my lifestyle.   They tend to be a more solid and strong willed dogs that when the work is put in, the bond is immense and we become a solid team over time.

The approval of my application took a little longer than it has in the past with all the publicity with Sunny and Sully, but I received an email the week of Thanksgiving that my app was approved.  I was actually quite surprised when the ladies in the Consumer Services Office called me on December 26th to invite me m to the Jan/February class that begins January 28th through February 10th.  It's become even more real as I received the envelope in the mail with my luggage tags/flash drive with the class lectures to read/listen to before my arrival at GDF.  Then I received my plane ticket confirmation in an email yesterday and it's becoming almost nerve wracking with the impending change.   I keep saying a prayer for God to keep me calm and take the changes as he sends them, as I have done just fine through each of the first 4 training and will be fine for this one too.

Boomer has been handling things OK as we moved his bed into the girls room and he is sleeping in their room.  He was struggling a lot at first with being asked to leave me and go to bed at 9:30 with the kids and was not happy with being left at home as we have begun his transition to retired guide life.  After a week of sleeping in the girls room, he isn't flat out running the other direction when MD comes to get him, but he is responding to her calling him to follow her, but still with a look back at me like "Mom- why do I have to do this? It's not where I'm supposed to be..."   MD will get up in the morning and feed him and let him out and he immediately comes running to wherever I am and lands at my feet to stay for the rest of the day.  So we will see how he continues over the next few weeks and after I get home too.

So with the new training format, I have some homework to do before I head to NY in order to be prepared for our training.  I'll share more on this in a later post. 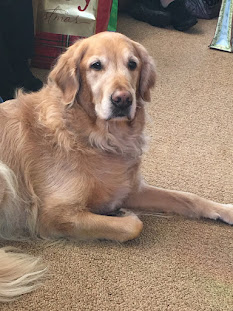